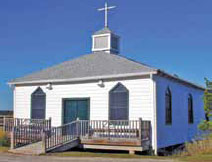 The Georgetown Layman’s Evangelistic Club, chartered in 1945, began the Pawleys Island House of Worship in 1947. The Club had 15 active members and was deactivated in 1965.

The marshland on which the Chapel stands was donated by Dr. and Mrs. J. H. Porter, who owned property across the street. The building was a vacated Pentecostal Holiness Church in Georgetown that was dismantled and rebuilt on the Island lot.

Mr. Layton retired in 1970 and Linwood Altman, in an agreement, took responsibility for the Chapel in exchange for the purchase of the realty company, which became Pawleys Island Realty Company. The Chapel became a family endeavor with a local board of trustees. 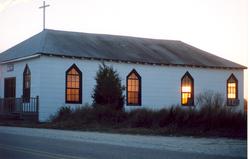 The Chapel drew from summer student ministers from Duncan Methodist Church in Georgetown. Currently outstanding ministers from many states, as well as local ministers, hold interdenominational services in the Chapel during the summer months. Visiting and local vocalists and musicians provide special music each Sunday. 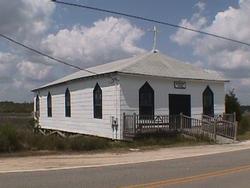 From 1971 to 1985 the Catholic congregation used the Chapel each Sunday for Mass. Other religious organizations have used the Chapel over the years. The first recorded wedding in the Chapel was held in 1971. Now there are an average of 20 weddings annually. Weddings can be held from September-May. The Chapel has also been used for a number of christenings and memorial services. All ceremonies must be conducted by an ordained minister. The Chapel will seat approximately 150 people.

The Chapel survived two major hurricanes – Hazel and Hugo. There was severe damage after Hugo, but contributions from several hundred people and the Pawleys Island Rotary financed its restoration. 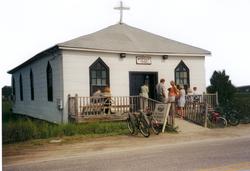 After surviving Hurricanes Joaquin, Matthew and Irma, new chairs, hymnals and a piano were purchased. In 2018, the pilings underneath the Chapel were replaced, the building was moved across the street during this time and moved back when completed. The building was leveled and new carpeting and a roof was installed

Here are the following charges are due at time of reserving your special date for a ceremony at the Chapel:

Reservations are handled through Pawleys Island Realty. For details and to confirm your date is available call (843)237-2000. Services will begin at 10:00 am on the first Sunday in June to the last Sunday in August. 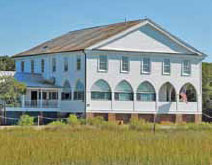 The Pelican Inn is an iconic property on Pawleys Island. The property is run as an Inn from Memorial Day through Labor Day and is available as a whole house rental in the off-season. This mid-island property offers private ocean access on a secluded stretch on Pawleys Island beautiful beach front. The rustic Inn has been a quiet retreat for families over the years as well as an event venue for many couples and families. It offers a grand creek dock, wide porches, and plenty of room for to enjoy your space. The Inn was built in the 1840's and history fills the house. The beautiful oak trees behind the Inn have a breath-taking view to capture your memories.

The Pelican Inn is available to rent for wedding ceremonies, receptions, or other events for an Event Fee of $3000, which will be an additional charge on your reservation. To reserve the Pelican Inn for an event, from mid-September through mid-May, please contact Susan Abram at Pawleys Island Realty at 843-237-2000 and she will be happy to assist you. If you are looking to book a room at the Inn between Memorial Day and Labor Day, check out the Pelican Inn Website.

Finally! We are thankful spring is in the air. The weather is nice, the water is beginning to warm up and life is back at the beach! This spring is full of excitement and fun activities. Brookgreen Gardens is offering several fun events and the flowers are blooming. So beautiful! They also have a restaurant so you can spend the entire day exploring. Continue Reading